Do you need to be an expert in something to know how to improve it?

The Day I Became a Skateboard Coach

The only thing you need to be good at as an improvement leader, is leading improvement.  Its often the case that we assume in order for someone to be able to offer support in improving, they need to be an expert in it.  This was certainly conventional thinking, right up until Dave Brailsford, with his 20 years experience in swimming, worked his magic with UK Cycling. And Gareth Southgate was widely criticised in the press for assembly a crack squad of…well, improvement experts.. made up of cyclists, athletes, rugby players, educationalists, military leaders, psychologists, marketing experts… How could they possible teach the England Football Team anything of use that national treasures like Harry Redknapp could not.  But they did. The results from 2018 speak for themselves.

Which brings us back to today’s story: the day my daughter decided she was going to learn to skateboard.

A little background: we are both klutzes. We fall over just from a standing position sometimes. Skateboarding is not something either of us know ANYTHING about.  But we DO know about how we work together to learn something, improve something. So, how did it go?  And what can it teach us about improvement?

Great idea, I say.  When would you like to start?

Stow away those grumbling ‘what ifs’ and ‘but hows’ and ‘really? You?’

Be immediately enthusiastic and encouraging.

2.Be specific about the first step and make it straight away

I’ll need a skateboard, she says

I’ve put a message out on insta, Jacob says I can collect his at 1pm.

Lots of great ideas never get further than that. But if you ‘put it out into the world’ and make the reality just a tiny bit closer, your odds of succeeding go through the roof.

3. Be clear on the big goal; and the mini goals

How long do you think it will take me, she says

I don’t know: but what do you want to achieve overall, I say

She tells me: is excited and inspired.

But what do you want to achieve today, in the first go we have? I say

I want to be able to stand on the board without falling off, she says, and maybe skate for 10 seconds.

The big goal is important; but so is identifying the little tiny steps you’ll need to take to get towards it. Learning to skateboard in a day wasn’t realistic; but choosing small goals was. We were ready to go

4. Be honest about fears

What is stopping you, I say

I’m worried about falling, I don’t know how to stop it, it doesn’t have any brakes, she says

So let’s learn how to get off without falling on your head, I say

Taking the first step is scary if you are scared of failing. But failure is inevitable. So the next best thing is learning how to fail WELL. With minimal trips to A&E, in our case.

Why does it keep tilting off to the left, she says

I don’t know, maybe it’s the camber of the road, I say.

Its not helped being on the pavement, she says

Maybe it’s the skateboard, I say, maybe the wheels are wonky.

They look fine, and Jacob doesn’t have problems, she says

Its me, she says. Its my balance. We need to work out what I’m doing which pushes me to the left, she says

Its easy to blame the system, the equipment…well…anything…if your improvement isn’t going to plan.  Be real about what is and isn’t impacting on your ability to show improvement.  It’s loads quicker in the long term.

6.Be diligent in data collection and analysis

Will you video me,  she says

No problem, I say

Ok, let me see it back, she says. I think its my back foot

OK, what are you going to change, I say

I’ll move it further forward, she says. Will you video me again?

Has that helped? I say

A bit, she says, let me watch it again. I think I’ll try this instead

Immediate, open, non judgemental feedback, in real time, with immediate response and change is the BEST way to make improvement. And the improvement is most rewarding when the IMPROVER makes the suggestions for change, not the observer, data collector, ‘expert’.

7.Be positive about failure

So it wasn’t all success: be each time she fell off FORWARDS, remembered to take her back foot off before her first, so her balance remained, we celebrated.

That was a GREAT fall off, I say

It was, she says, I’m getting better at rescuing it before the board runs away.

Things will go wrong. If they aren’t, check it you’ve actually made a change….or are measuring the right thing…. or being real…You’ll learn the most from when it doesn’t go to plan. So celebrate it.

8. Be ready to go back a few steps

Oh that’s frustrating, she says, I was getting the hang of it, but those cars spooked me.

OK, so what are you going to try to get confidence back, I say

I’m just going to practice standing on the board, doing a few single push offs

Progress is always three steps forward, two steps back.  But if you go back three steps, you’ll find where you were comfortable and rebuild much quicker the next time round.

9. Be aware of when to stop, for today

That was fun, she says, but I’m hot, lets get a drink

Will you send the video to the family WhatsApp? She says

Stop while its still fun, and don’t forget to celebrate the success…after all, you’ve been celebrating all those failures…

So what have you learnt?  I say

And what have you learnt about how you learnt, I say

I’ve learnt we don’t need to know anything about skateboarding to learn how to skateboard. I’ve learnt that watching myself after each go helps me know what to try next. I’ve  learnt to change only one thing at once. And I’ve learnt that you can achieve everything you want in one day, if you break it down.

The real learning in any improvement project happens when you take time to understand WHY, HOW and WHAT of the whole enterprise. Because that’s where the improvement expertise really develops.

Want to know more about our social movement to reduce frustration and increase joy in work?

Rachel Pilling and Dan Wadsworth are the winners of the 2017 NHS Improvement Sir Peter Carr Award.

We’d love to hear from you…follow them on twitter @miss_pilling  or @danwods or get in touch using email above. 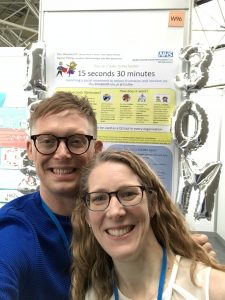