Its not an understatement to say that winning the Sir Peter Carr Award in July 2017 has changed our lives. What began as a faintly ridiculous story about messy bedrooms and an irresistible urge to find another project to work together on whilst furthering our knowledge, has become the most rewarding project we are likely to ever do 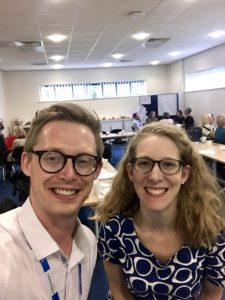 But lets go back a bit..who are we, what do we do and what made us apply.

We are Rachel Pilling, a consultant ophthalmologist and Dan Wadsworth, who was Deputy Head of Access at the time of applying for the award. We knew we enjoyed working together as a clinician manager team and had the same ethos – trying to make it easier for people to do great work. The opportunity to gain more experience in quality improvement – a subject we had no formal training in when we applied – and a proper excuse to work together more was the stimulus to apply.

There’s something really special about a clinician-manager partnership when it works well. Gaining insights into each other’s worlds; the pressures and demands; the varied skills and experience; a complementary network and set of connections. Being able to spend time developing that more has been one of the biggest pay-offs of winning the award.

Being a Sir Peter Carr finalist has opened so many doors we hadn’t known existed. It became a challenge to begin to spend the money – we were offered so much excellent free support and training. Having an opportunity to be coached was a real eye-opener – so much so Rachel has gone on to train as a coach herself. The QSIR practitioner course gave us the structure and theory we needed to back up our idea’s development as well as 5 extra golden days with the other finalists to support each other. Need to learn how to get the most from twitter? 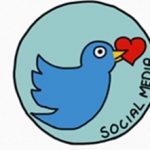 How to make an animation and use storytelling effectively? How to prep and record some green screen videos? Reading from an autocue? How to create and maintain a website? We’ve learnt skills we never would have had the opportunity to do otherwise in areas which NHS organisations find it hard to justify funding. If you’ve a few minutes to spare, explore SeaSaltLearning and their  Social Leadership resources (some of which are FREE!) 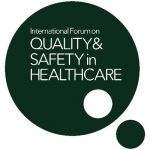 We’ve been able to travel to Europe and America to immerse ourselves in the international Quality Improvement community – a great way to hone your ‘elevator pitch’ is to stand in front of a poster at the breaks and persuade people to listen to your idea rather than queue for coffee. It’s at these events that we truly began to ‘be outrageous’ with our goals and aspirations for the social movement. If we needed the head of IHI Derek Feeley to know we existed, then why not gate crash the “VIP” drinks to get ourselves in front of him, pinning a badge onto his lanyard?

So…that’s lots about us, but what about the idea? How did that work out? Were the interview panel right in their hunch that we were more than an interesting QI project – we were in fact starting a social movement?

15s30m encourages all staff to spend an extra 15seconds on a task now, to save someone else 30 minutes later on, reducing frustration and increasing joy. Anyone can launch their own #15s30mMission, or run a 15s30m Workshop – there’s no knowledge or training needed – if you want to spread #JoyInWork then the person to start with is you! 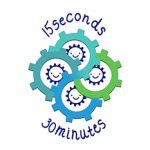 Whilst numbers alone don’t tell the whole story, @15s30m has gained over 2500 followers on Twitter in 18 months; we’ve attended 15 local and national events; we’ve been published in the British Medical Journal and are about to open booking for our second National 15s30m Festival which takes place on 1 November.

The sign of a successful social movement is that it moves without you.

Here’s where the real magic has happened. We’ve engaged with ‘new power’ – informal leaders who are superconnectors who bring about change from within their organisations. Without us leaving our base, we are live in over 40 organisations in the UK with hundred of workshops being delivered by our army of #15s30mHeroes. 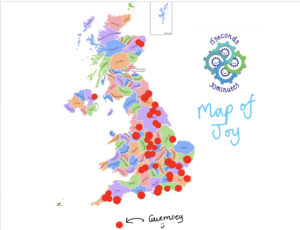 In a handful of places we have been to  visit, but usually to support an existing #15s30mHero and see the impact it has had on their teams. We are used as a tool by CQC and several Academic Health Science Networks, are part of the curriculum on a patient safety postgraduate course and have been included in this year’s NHS Horizons School4Change. And just look out in October for our final “audacious goal” which has come true….

If you are thinking of applying for this years Sir Peter Carr Award, our advice is this: be original; be extraordinary; be relentless in pursuing your goal; be fiercely protective of your time; be careful to pick a project which will bring you joy.